Main Region_The Inside Story of Technology in Hong Kong SAR

The Inside Story of Technology in Hong Kong SAR 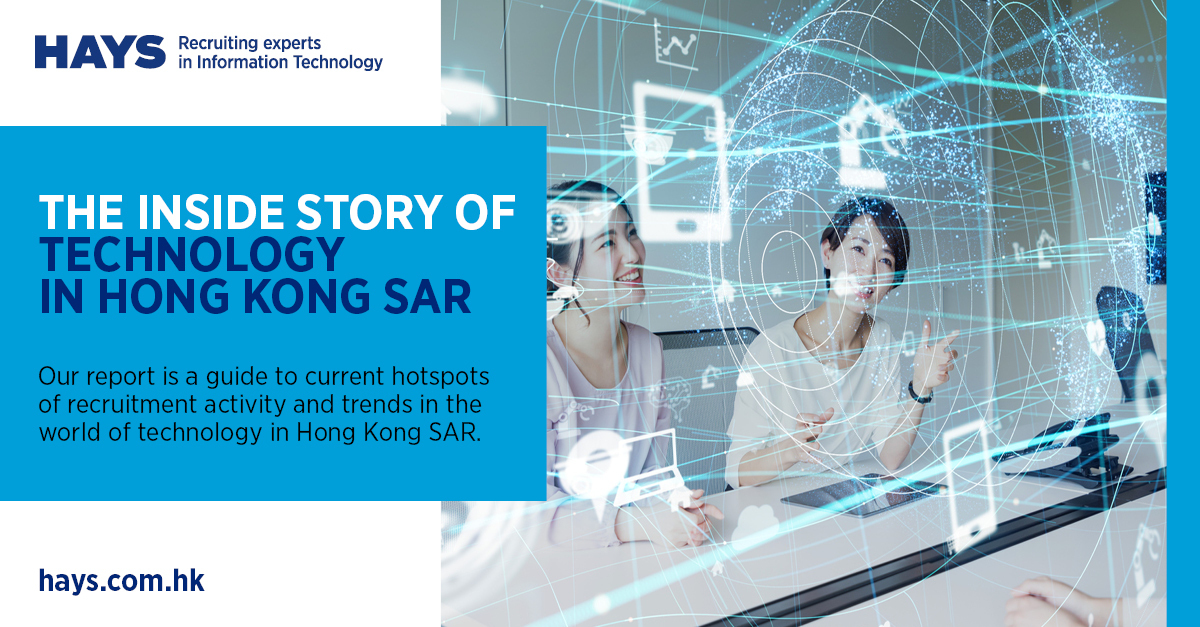 2019 was a challenging year for Hong Kong, whose economy took significant impact from ongoing geo-political tensions against the backdrop of a synchronised global economic slowdown. These economic challenges are expected to continue into 2020, prompting Hong Kong’s government to announce new measures that Financial Secretary Paul Chan stated would focus on, “supporting enterprises, safeguarding jobs, revitalising the economy and easing poverty”.

But while sectors like retail are amongst the most affected, there has been a surge in e-commerce as more businesses seek to move away from physical storefronts. Additionally, the city remains the prime financial hub for the region, bolstered by the recent awarding of eight virtual banking licenses that will increase demand for data scientists and data governance professionals who can build data frameworks and business models. The atmosphere of uncertainty has also led more companies to focus on technology and digital transformation to maximise efficiency at minimum cost. These factors have led to strong expected growth for IT and digital technology in Hong Kong as new technologies will continue to be implemented into 2020, led by the financial services sector.

This growth has been largely led by the ongoing market uncertainty as more companies seek to transform their businesses by implementing emerging and/or enterprise level technologies into their business to increase efficiency and create cost savings for the long run. The financial services industry, for example, has started to put more emphasis into predicting future events by adopting advanced analytics and machine learning technology. “A lot of companies are also moving to e-commerce models to reduce dependence on brick and mortar stores and find ways to reduce impacts from the trade war,” Kenneth shares.

But while demand for tech candidates remains steady, Hong Kong’s ongoing shortage of technical talent has rendered the market in short supply. Trevor Chan, Business Manager at Hays Hong Kong, shares that this is certainly the case within IT security, risk and compliance. “More candidates are becoming hesitant to move due to the ongoing economic uncertainty. Traditional roles such as programmers and business analysts remain steady but specialised areas such as risk and compliance, infrastructure and cyber security continue to see serious shortages of talent.”

The rise of virtual banks has also exacerbated the talent shortage, as Kenneth explains, “Being a financial centre, Hong Kong’s demand for talent has exceeded supply for the last 40 years or so. However, the entry of virtual banks will be marked by rapid expansion. Banking was already seeing a shortage of talent – so now we have a situation where demand significantly exceeds supply.” The requirement of bilingual or even trilingual candidates (English, Cantonese and Mandarin) for such roles further widens the skills mismatch caused by roles such as data science that often need high educational and technical qualifications not commonly found in Hong Kong.

The difficulties of finding the right match for these roles combined with the increasing focus on cost control has led to many companies exploring flexible recruitment solutions (contracting/temporary workers) instead of new permanent headcount. Suitable candidates, both contracting and permanent, hold the advantage when it comes to compensation and can expect significant increments if selected.

Data science is currently one of the most in-demand sectors, particularly for junior-mid level candidates with knowledge of R or Python languages. For programmers, software engineers and developers, Java skills are vital owing to its widespread usage in Hong Kong. Communication skills are also increasingly important and is an important area to work on for junior candidates in particular, as Kenneth shares, “We see a lot of junior candidates who may be a little bit unfamiliar with answering interview questions. This can be mistaken for a kind of directness which can then translate into not being a good culture fit. My advice to such candidates would be to practice for interviews and communicate with us, the recruiters, for any direct questions relating to what they want from the job.” Fresh candidates are also in high demand, owing to the malleability of their skills which are valuable in the fast-changing tech landscape.

Communication skills are also the differentiating factor when it comes to senior-level candidates, says Kenneth, as skills such as business acumen, domain knowledge and project management have become common denominators for manager roles. “It is almost surprising how similar resumes can be within the industry. What stands out is the charisma of the candidate, along with their business strategy and views.”

For cyber security, another area in high demand, Trevor shares that industry experience trumps skill sets in priority. “If you apply to a bank but have never worked in a bank, then the expectation would be at least some sort of consulting experience to offset the lack of banking experience,” he says. For senior cyber security candidates, experience dealing with regulators can be a gamechanger, as experience in infrastructure, security and audit can often be gained over time, but not everyone has the chance to deal with regulators first-hand.

Overall, Trevor predicts that security will remain one of the most active areas as emerging technologies continue to develop. “Areas such as AI, machine learning, data science and RPA are now readily available for candidates to learn and pick up. These would be good areas to upskill in considering they have always seen a shortage of suitable talent.”

As organisations compete for talent in a candidate short market, having a positive work culture has become an important area of development and emphasis. Candidates are increasingly wary of the importance of the right fit, as Kenneth explains, “Salary is no longer first priority for candidates. Work culture and the chemistry they have with hiring managers during the interview stage is what matters the most. I have seen candidates back out of 30 per cent increments simply because they knew they would not survive in a misfit culture.”

Organisations are also increasingly open to hiring overseas candidates, particularly for specialist areas like cyber security and cloud technology. However, while basic benefits such as flight tickets, shipping and temporary housing will be provided, such candidates can no longer expect an ‘expat package’ and will be paid the same as their local counterparts. Benefits are also a hot topic, with several companies offering flexible working hours and fringe benefits such as above average annual leaves, work from options and hot desks. “HSBC recently even rented a workspace at WeWork to attract junior candidates – and it worked!” Kenneth shares.

On a whole, there is little doubt that technology will continue to be on the rise, despite economic hurdles. As Kenneth signs off, “The sector will get bigger and bigger as organisations will always be looking for ways to make their business processes more efficient. This the direction the world is going in and in the long run, demand will only continue to grow.”

If you would like to discuss this report in more depth or you wish to discuss your job search or recruitment needs, please email Kenneth Ling at Kenneth.Ling@hays.com.hk or Trevor Chan at Trevor.Chan@hays.com.hk

The Inside Story in Hong Kong SAR