While working professionals in Asia are gaining more knowledge on the positive impact of diversity and inclusion (D&I) in the workplace, the slow implementation of D&I practices has resulted in only marginal progression in the region, reveals the latest Diversity & Inclusion report by leading recruitment experts Hays.

The findings of the 2019/2020 version of this annual report are based on survey responses from close to 2000 working professionals based in China, Hong Kong SAR, Japan, Singapore and Malaysia. 87 per cent of respondents were born in Asia, 54 per cent were female, and 39 per cent held managerial positions. The survey covered personal experiences of the respondents with D&I in their workplaces, as well as their perceptions of its practice within and impact on their organisations. 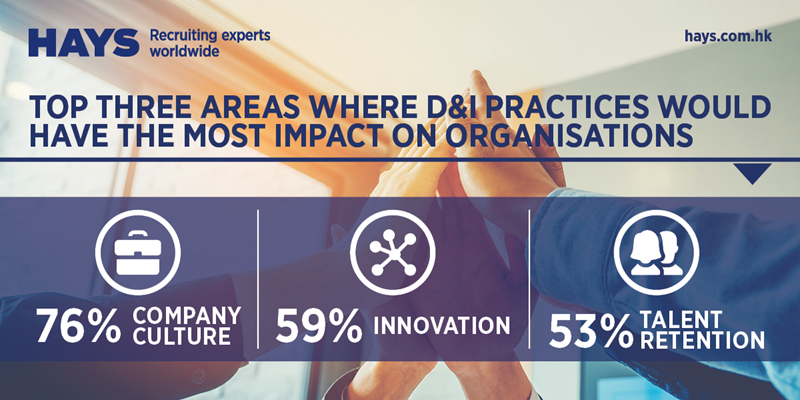 When asked their opinion on which areas D&I practices would have the most impact on their organisation, 76 per cent of respondents in Asia chose ‘company culture’, the top choice for the second year in a row. 59 per cent voted ‘innovation’ as the second area most positively impacted, demonstrating a nuanced understanding of workplace dynamics within the region. 53 per cent voted ‘retention of talent’, knocking last year’s choice of ‘organisation leadership’ out of the top three running.

Perceptions of equality remain relatively high as well, with 38 per cent of respondents feeling they had the same career opportunities for career progression as equally capable peers, regardless of age, disability, ethnicity, gender or socio-economic background. 35 per cent felt their chances were ‘somewhat equal’. 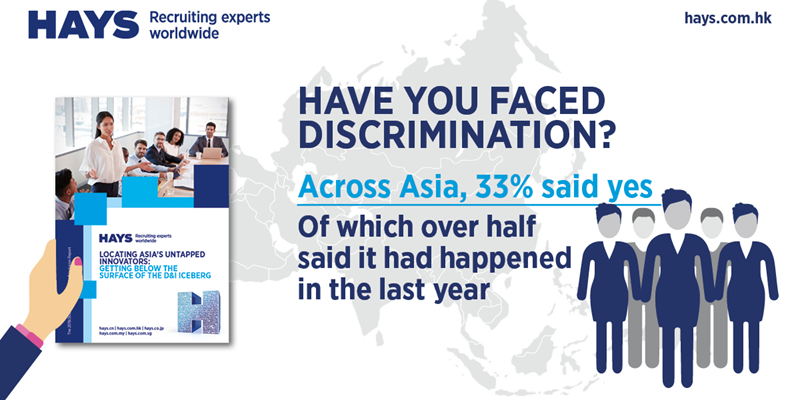 Last year, 39 per cent of respondents across Asia said their line mangers were female. This year, the number has marginally moved up to 40 per cent. Overall, 57 per cent of respondents across Asia believed their organisations had diverse leadership teams, a potentially higher regional average that was brought down by Japan’s low score of only 27 per cent who agreed. China scored the highest, with 70 per cent agreeing.

Across the region, however, only 40 percent of respondents said there has not been any occasion where they felt excluded from participation at work because of their age, gender, ethnicity, disability, sexual orientation or socio-economic background. This leaves one third of respondents having faced some form of discrimination, with over half saying this had happened to them in the last year.

Perception of leadership bias at a high

Despite relatively high diversity within leadership teams, the role of leaders in D&I continues to come under the microscope. 60 per cent of respondents believed that those in leadership positions were biased towards promoting others who look, think or act like them, while 59 per cent felt this way about hiring processes.

This perception is further cemented by 72 per cent considering unconscious bias training for leadership to have a direct positive impact on the hiring of more diverse talent. However, only 49 per cent of organisations provided such training – a figure skewed by the high 64 per cent in China. 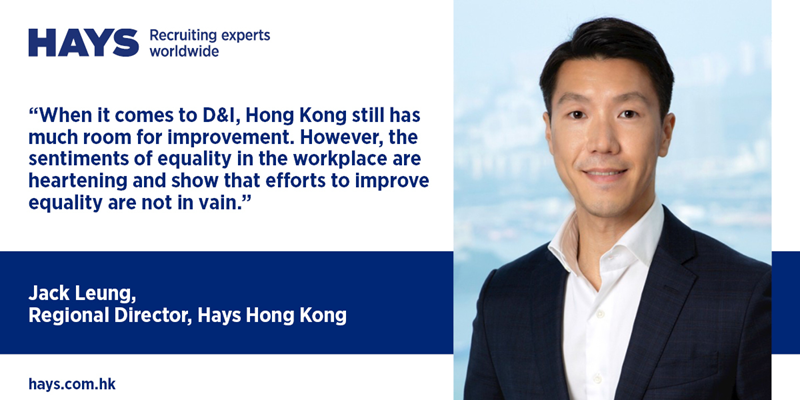 While the last 12 months have been viewed by many as a period of stagnation in Hong Kong’s progression to improved gender diversity, overall statistics point to a general sentiment of equality when compared to the rest of Asia. Only six per cent of respondents cited gender as a reason for diminished chances of being selected for a job – the lowest such response in Asia. 48 per cent of local respondents said they had never felt excluded from their current places of work due to diversity reasons, above the Asia average of 40 per cent. In fact, of those that said that they had, 61 per cent reported that it had not occurred during the previous year, the highest number in Asia to say so.

The same can be said for career progression, where Hong Kong topped the Asia list with 48 per cent of responders feeling that equality was in place, regardless of age, gender, ethnicity, disability, sexual orientation and socio-economic background – the highest percentage in Asia. Comparable improvements can also be seen in pay equality over the same indicators, with 43 per cent of employees saying that salary and rewards were fairly appointed regardless of diversity indicators, as compared to last year’s 29 per cent.

Jack Leung, Regional Director at Hays Hong Kong commented, “When it comes to D&I, Hong Kong, like many of its Asian neighbours, still has much room for improvement. However, the consensus and sentiments of equality in the workplace are heartening and show that efforts to improve equality from both the government and employers are not in vain. This, along with the ongoing increase in diversity recruitment targets for Hong Kong businesses this year, should serve as encouragement for even better results the next.”

Hays plc (the "Group") is a leading global professional recruiting group. The Group is the expert at recruiting qualified, professional and skilled people worldwide, being the market leader in the UK and Asia Pacific and one of the market leaders in Continental Europe and Latin America. The Group operates across the private and public sectors, dealing in permanent positions, contract roles and temporary assignments. As at 30 June 2019 the Group employed 11,500 staff operating from 265 offices in 33 markets across 20 specialisms. For the year ended 30 June 2019: